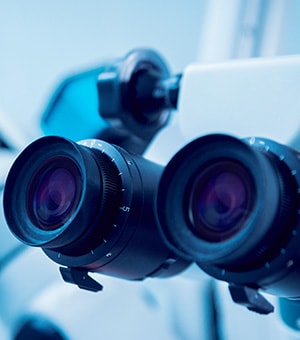 When Kevin Catmull couldn’t see properly it was not just his sight that was at risk. His wife, who has leukaemia, depends on the retired police officer from West Yorkshire to provide her with medical care.

The 57-year-old, from Dewsbury, West Yorkshire, was diagnosed with a retinal detachment after visiting his local Optical Express at White Rose in Leeds with concerns about his left eye. “It was like having a net curtain drawn over my eye,” he said.
Heshow Jamal, the optometrist who examined him, immediately booked an appointment for him at St. James University Hospital – an action which saved his sight.

Kevin said: “I can’t thank the team at Optical Express enough. I could have gone blind in my left eye.
“I don’t know what I would have done because my wife was diagnosed with leukaemia 18 months ago and I have been her main carer.”

The former road traffic officer’s ordeal began just over a year ago. After undergoing laser eye surgery at Optical Express’ White Rose clinic in 2008, which had restored his vision and enabled him to get rid of his glasses, he had noticed a deterioration in his sight.

“I went to Optical Express, thinking that it was something to do with my laser treatment,” explained Kevin. “Everything was brilliant after my laser eye surgery so I knew something was wrong when I could see lots of floaters.

“The optometrist looked in my right eye and it was fine. Then she looked in my left eye, said she would be back in a minute and when she returned she told me I was booked into St. James. She explained that she thought I had a partially or fully detached retina and required immediate medical attention.”

At his hospital appointment, it was confirmed that Kevin was suffering from a detached retina. It was also confirmed that the condition had developed as a result of age and being short-sighted. “The jelly in my eye was starting to shrink and unfortunately for me was pulling the retina at the back of my eye,” he said.

“The NHS assured me it was not related to my laser eye surgery which treats the front of the eye.”

Kevin underwent vitrectomy surgery on the NHS in October 2014, during which the vitreous gel in his eye was removed to repair the retina. The gel was replaced by an oil bubble to allow the retinal detachment to heal. However, six months later Kevin developed a cataract which by July of this year required surgery. He has now undergone a lens replacement procedure, also on the NHS, in his left eye to treat the cataract.

Recently, Kevin visited Optical Express for a check-up where he learned that his sight is continuing to heal and improve.
“I can’t imagine how bad it could have been,” added Kevin. “I doubt I would have been able to drive anymore and it would have stopped me doing other things, like cycling and going to the gym. If I hadn’t gone to Optical Express I could have lost my sight.”
Heshow Jamal, Optometrist at Optical Express’ Leeds White Rose clinic, said: “One year and many procedures since Kevin came into the clinic, his eyesight is back to almost 20|20.

“Retinal detachments are rare, but very serious, so when I examined Kevin’s eye and saw the tell-tale signs, I called the hospital and made him an emergency appointment.

“The average optometrist will see around three cases of retinal detachment in their career, but I had already treated three in my training year, so knew exactly what I was looking at.

“Kevin’s decision to seek help quickly undoubtedly saved his vision. Retinal detachments can cause complete and irreversible sight loss if left untreated. If the retina becomes fully detached it dies and cannot be repaired.

“Increasing number or size of floaters, flashing lights, and a curtain or shadowing of vision are all indicators of a partial retinal detachment. Anyone experiencing these symptoms should visit their optometrist immediately.”